Search for a window specialist 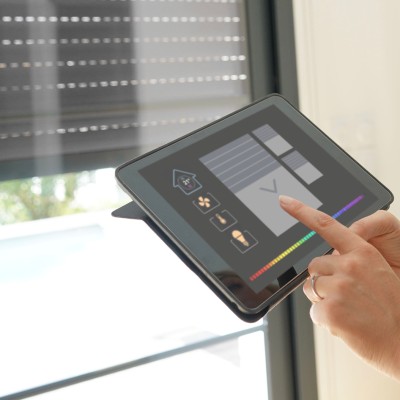 Modern living and working in the smart home

Smart home solutions are moving into more and more houses and flats. The spectrum ranges from smart individual components that are controlled via an app to self-acting systems with several measuring and control points. Even simple solutions can bring significant gains in energy efficiency, comfort and safety - for example, in heating costs and indoor air quality, simply by automatically opening and closing windows. With the convenient smart home solutions that VEKA offers under the TEXINO brand, such benefits can be easily realised.

More and more people in Germany are using networked, automated technology in their house or apartment. This concept, better known as smart home, is already enjoying widespread use. In a survey by industry association Bitkom, 41 percent of respondents said they had corresponding devices. The most frequently mentioned devices were smart lights that can be controlled via smartphone and run through various scenarios on request, such as a simulated sunrise to wake people up in the morning. But smart shutters, awnings, radiators and thermostats are also already available in more than one in ten households.

There are two important reasons for the triumph of the smart home. On the one hand, the technology is now very uncomplicated and user-friendly: you no longer have to be an expert or a real technology fan to try out simple solutions. On the other hand, the smart home promises important benefits ranging from significant energy savings - especially for heating - to greater living comfort and a gain in security. However, the full potential of these effects can only be exploited with a more comprehensive smart home installation. Ideally, planning and implementation should be left to specialists, such as a window fabricator.

How the smart home works

The term "smart home" could best be translated as "thinking home". The basic idea behind this concept is illustrated by a simple example. In a room, the carbon dioxide content of the air increases because several people are staying there. As soon as a threshold value is exceeded, a CO2 sensor becomes active and sends a control command to the motor in the window of the same room. This moves the window sash into the tilt position so that fresh outside air can replace the stale room air: The CO2 content drops. As soon as the value is back within the target range, the sensor sends another signal to the window motor and the window closes again.

So already this minimalist system can react automatically to improve the quality of indoor air. In fact, however, it still offers many optimization possibilities. For example, smart thermostats could be used to reduce the heating in the room at the same time as the window is opened to minimize the loss of valuable heating energy. With an additional smoke detector, the smart home system could also detect whether a fire is the cause of the rising CO2 content and send an alarm to the smartphones of the owners. 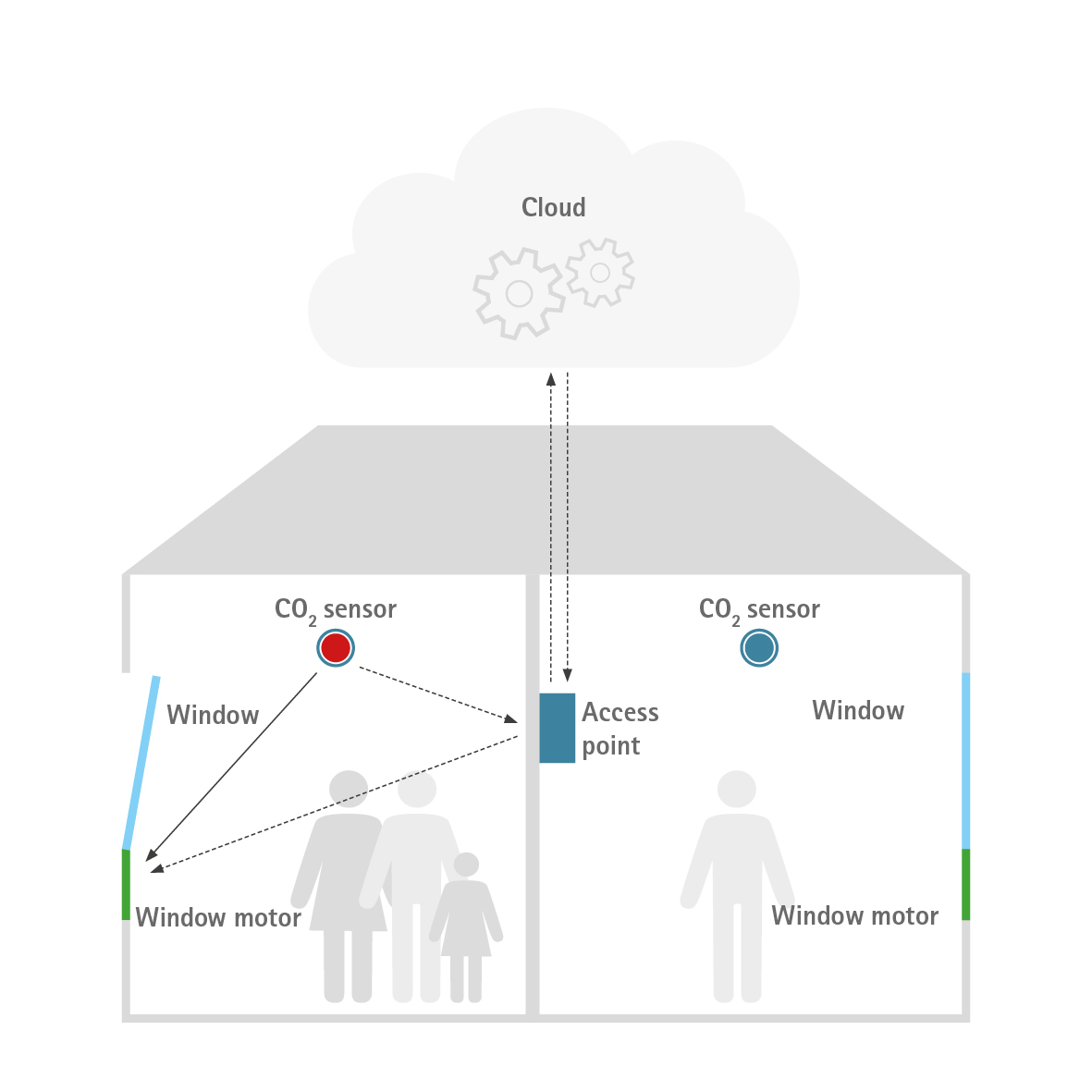 Even the direct interaction of a CO sensor2 and a window motor (solid arrow) can ensure better indoor air. As a rule, the signals run via a central access point and the smart home cloud (dashed arrows) to enable more sophisticated scenarios.

Typical elements of a smart home

Such more complex case distinctions and the bundling of several components in one network go beyond the capabilities of simple measuring or control modules. Powerful smart home systems therefore always include a central communication node. This in turn is connected to the system's own cloud, where the actual calculations and decisions take place. In addition, there are control elements that enable targeted intervention by the user at any time, such as wall switches or the smartphone app.

The modules mentioned above can be used to implement smart home solutions of almost any complexity. For this reason, they are included in the systems of practically all providers on the market, albeit under different names in individual cases. The following list provides an overview of the main components. 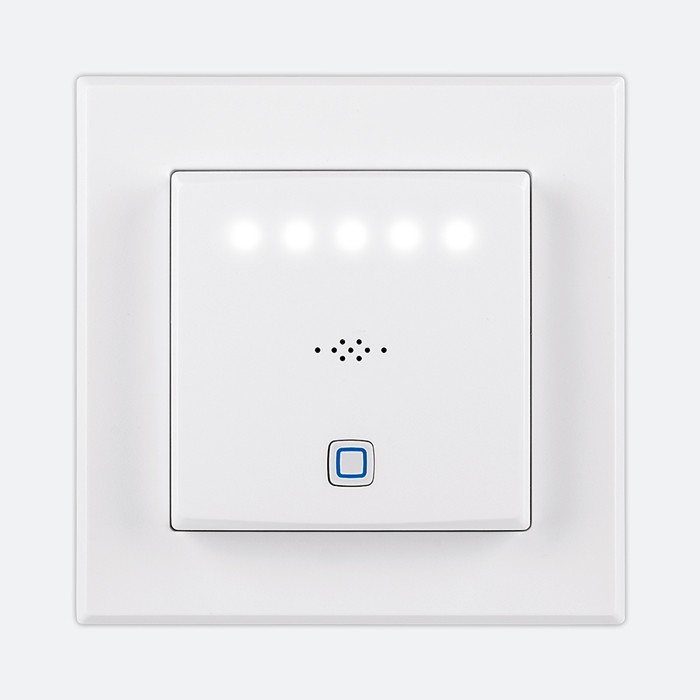 Record the condition of the building and all components 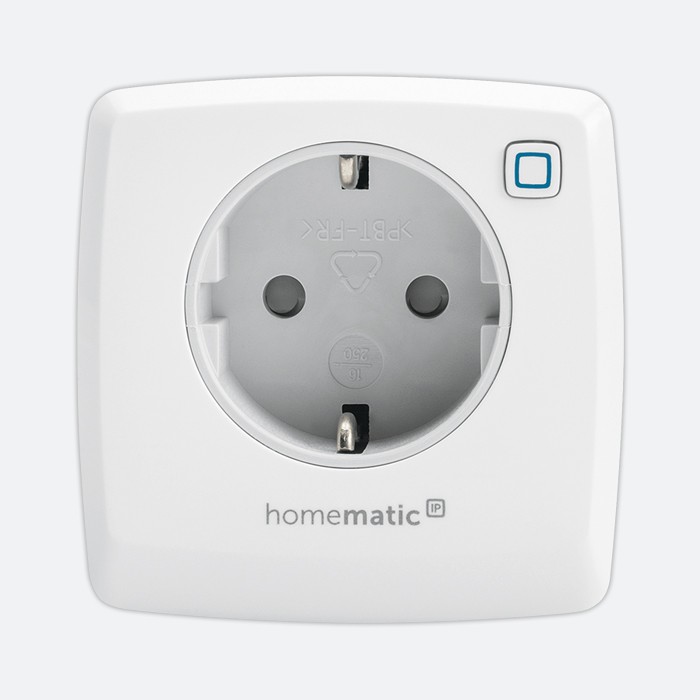 Actuators for bringing about the desired changes of state The central component of a smart home system links all the other elements into a powerful whole. It receives the measurement signals from the sensors, forwards the values to the system's own cloud for processing, receives its response and in turn sends corresponding control signals to the actuators.

In TEXINO's smart home system, the access point acts as a control centre by networking up to 80 components. Other manufacturers use different designations, e.g. hub, base station or gateway. So that users remain in control

Smart home solutions can be planned particularly comprehensively for a new building and installed almost invisibly. But retrofitting is also possible without any problems in existing properties. The necessary effort pays off quickly, because valuable benefits can be achieved even with relatively simple systems. Some examples are listed below.

More energy efficiency in the smart home
Turning down the heating when ventilating - in everyday life, people are only too happy to skip this additional action. The effect of a smart home system that takes over this task is all the more impressive, as shown in a study by European market leader eQ-3, which compared two buildings at a vocational school in Leer, East Frisia. One of the buildings was equipped with window contacts and smart radiator thermostats, so that when the windows in a room were opened, the radiators were automatically throttled. The result: Over the study period of four fall and winter months, this building consumed almost a third less heating energy.

More comfort and well-being in the smart home
Almost one in four employees works from home. However, conditions in the home office are not always optimal - which is often only noticed late in the day. A smart home system with sensors for air humidity and carbon dioxide that automatically opens the windows to provide fresh air prevents lack of concentration and early exhaustion.

More security in the smart home
When someone goes on a trip, he can tell a tale - for example, about nagging doubts as to whether he really locked all the windows and exterior doors tightly before leaving. It's a good thing that the house is equipped with the appropriate contacts and drives: It can be locked completely with just one tap via a smartphone app, and this status can be checked at any time while on the move.

As the world market leader for PVC-U window and door systems, VEKA is also leading the way in the field of smart home. Under the TEXINO brand, the company offers a complete smart home system that, with its numerous components, is perfectly matched to its own high-quality profile systems.

The TEXINO portfolio was developed together with the European smart home market leader eQ-3 and is fully compatible with its Homematic IP system. As a result, TEXINO is extremely powerful, uncomplicated to install and also particularly flexible: it can be connected very easily with devices and services from other manufacturers, including, for example, the well-known voice assistants from Amazon and Google.

A particularly important feature of TEXINO is its high level of security. Homematic IP is currently the only smart home solution whose protocol, IT and data security has been certified by the German VDE association. The associated cloud is operated exclusively on German servers, and operation is completely anonymous: it is not possible to draw conclusions about the identity of the users and their individual usage behaviour.